Some users running IDA on Windows & Linux X11 platforms with Hi-DPI displays, have reported that IDA looks rather odd: the navigator bar is too narrow, the text under it gets truncated, and there is overall feeling of packing & clumsiness:

Looking closely, one can notice the following issues (probably not an exhaustive list) 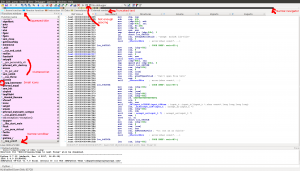 Note: this should not happen and shouldn’t apply for OS X users running IDA on Retina displays. Nor should it happen (but we didn’t get a chance to test this) on non-X11 Linux display managers, such as Wayland.

On Linux X11 & Windows, if you are using Hi-DPI monitors and IDA looks somewhat like it does in the above screenshots, please try setting the environment variable QT_AUTO_SCREEN_SCALE_FACTOR to 1:

Some things are still not perfect (e.g., checkboxes might remain small), but IDA definitely looks better.

Please give it a try!

When one applies scaling/zooming, either in Windows and Linux X11, that will have the effect of causing the OS to return scaled values for font metrics when queried using point sizes (which is almost always the case.)

For example, when the font metrics for a font of size 12pt are requested by a Qt application, instead of returning 14 pixels as it would on a non-scaled system, the operating system will instead return 28 pixels on a 200% scaled one (in other words, this is essentially a font database-related feature).

That will, in turn, have the net effect of causing Qt to compute layout of the surrounding widgets according to those scaled font metrics, which explains why the text is (for the most part) not truncated.

However, what applying scaling does not do, is tell Qt that it should scale all other pixel measurements by that scale factor.

The QT_AUTO_SCREEN_SCALE_FACTOR environment variable is an opt-in that program users can define, in order to control how the program should look. It will in essence instruct Qt to perform automatic scaling of (non-font-related) graphical operations according to the pixel density of the screen(s).

Why is this not needed under OS X + Retina?

This is not needed under OS X + Retina, because Qt does not need to perform any kind of scaling there: the scaling is performed by the drawing primitives of the OS itself, and is entirely transparent to the application.

(In fact, an OSX application doesn’t even work with the real screen geometry, but rather with an “abstract” coordinate system, normalizing pixel sizes across screen densities.)