News about the x64 edition

Sorry for the long silence since IDA v6.95, we all were incredibly busy with the transition to the 64-bit version. We are happy to say now that we are close to the finish line and will announce the beta test soon.
Transition to x64 itself was not that hard. We have been compiling IDA in x64 mode since many years, so making it actually work was a piece of cake.
It was much more time consuming to clean up the API: make it more logical, easier to use, and even remove some obsolete stuff that we have been carrying around since ages. Switching to the x64 is the unique opportunity for this cleanup because there are no existing x64 plugins yet and we won’t be breaking any working plugins. We hope that you will like the new API much more.
Just to give you an idea: we made more than 8000 commits to our source code repository and just the commit descriptions are more than 1MB. We reached 1.6M lines of source code without taking into account any third party or auto-generated files. I haven’t counted how many lines had changed since v6.95, but it can easily be that every second line got modified during the transition. In short, it was a huge undertaking.
While it was huge, we did not manage to make everything ideal (is it possible at all?…) We will continue to work on the API in the future.
Naturally, we were also busy fixing our past bugs (309 bugs since the public release of v6.95, to be exact; fortunately almost all of them reveal themselves in very specific circumstances).
We were also working on new features. Just to give you an idea of the new stuff, see very short descriptions below.
First of all, IDA fully switched to UTF-8. It will be possible to use Unicode strings everywhere, and specify any specific encoding for a string in the input file. The databases will be kept in UTF-8 as well, which will allow us to get rid of inconsistencies between Windows and Unix versions of IDA. In fact it is deeper that a simple support of UTF-8, we have a new system for international character support but it deserves a separate blog entry. We will talk about it in more detail after the release.

We will release the PowerPC 64-bit decompiler along with IDA v7. This assembler code (which did not fit into the screenshot): 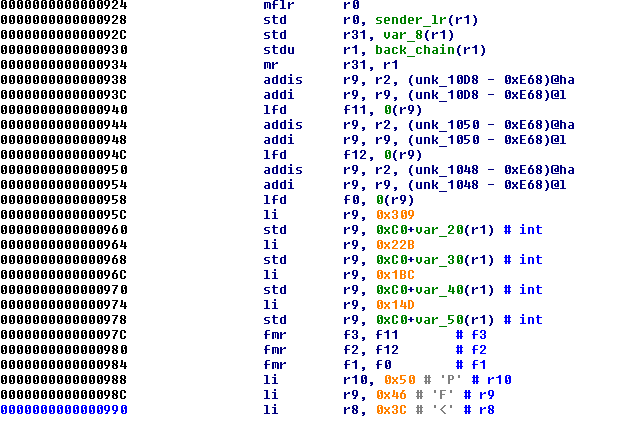 Gets converted into one line:

We added support for exception handling. IDA recognizes try/except blocks and neatly comments them in the listing: 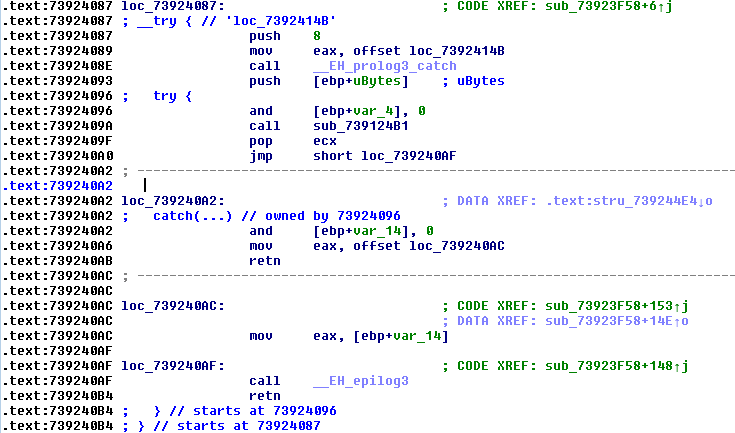 Stay tuned, we will announce the beta test soon!