As we’ve mentioned before, the I in IDA stands for interactive, and we already covered some of the disassembly view’s interactive features like renaming or commenting. However, other changes are possible too. For example, you can change the operand representation (sometimes called operand type in documentation). What is it about?

Most assemblers (and disassemblers) represent machine instructions using a mnemonic (which denotes the basic function of the instruction) and operands on which it acts (commonly delimited by commas). As an example, let’s consider the most common x86 instruction mov, which copies data between two of its operands. A few examples:

The first example uses two registers as operands, the second a register and an indirect memory operand with base register and displacement, the third — another memory operand as well as an immediate (a constant value encoded directly in the instruction’s opcode).

The last two examples are interesting because they involve numbers (displacements and immediates), and the same number can be represented in multiple ways. For example, consider the following instructions:

All of them have exactly the same byte sequence (machine code) on the binary level: B8 64 00 00 00. So, while picking another operand representation may change the visual aspect, the underlying value and the program behavior does not change. This allows you to choose the best variant which represents the intent behind the code without having to add a long explanation in comments.

The following representations are available in IDA for numerical operands (some of them may only make sense in specific situations):

All hotkeys revert to the default representation if applied twice.

In addition to the hotkeys, the most common conversions can be done via the context menu: 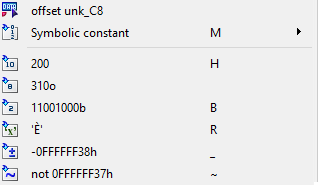 The full list is available in the main menu (Edit > Operand Type):

as well as the “Operand Type” toolbar: 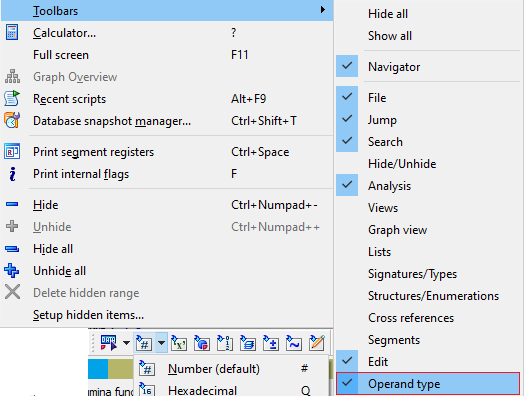 Two more transformations can be applied to an operand on top of changing its numerical base:

Finally, if you want to see something completely custom which is not covered by the existing conversions, you can use a manual operand. This allows you to replace the operand by an arbitrary text; it is not checked by IDA so it’s up to you to ensure that the new representation matches the original value. Hotkey: Alt–F1.