Navigation band, also sometimes called the navigator, or navbar, is the UI element shown by default at the top of IDA’s window, in the toolbar area.

The colors are explained in the legend; the default color scheme uses the following colors:

Colors can be changed when changing the color scheme, or individually in Options > Colors… , Navigation band.

In addition to the colors, there may be additional indicators on the navigation band. The yellow arrow is the current cursor position in the disassembly (IDA View), while the small orange triangle on the opposite side shows the current autoanalysis location (it is only visible while autoanalysis is in progress).

The combobox (dropdown) at the right of the navigation band allows you to add some additional markers to it. For example, you can show: 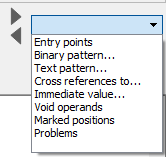 The markers show up as red circles and can be clicked to navigate.

The control can be hidden or shown via View > Toolbars > Navigator, or the same item in the toolbar’s context menu.

It can be placed at any of the four sides of IDA’s window by using the drag handle.

In the horizontal position, you can show or hide the legend and the additional display combobox from the context menu.

By default, the navigation band shows the complete program, however you can zoom in to see a more detailed view of a specific part. Zooming can be done by Ctrl + mouse wheel, or from the context menu. The numerical options specify how many bytes of the program are represented by one pixel on the band. 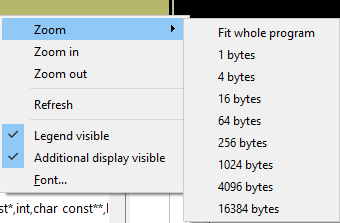 Once zoomed in, the visible part can be scrolled with the mouse wheel or by clicking the arrow buttons at either end of the band. You can click into any part of the band to navigate there in the disassembly view.